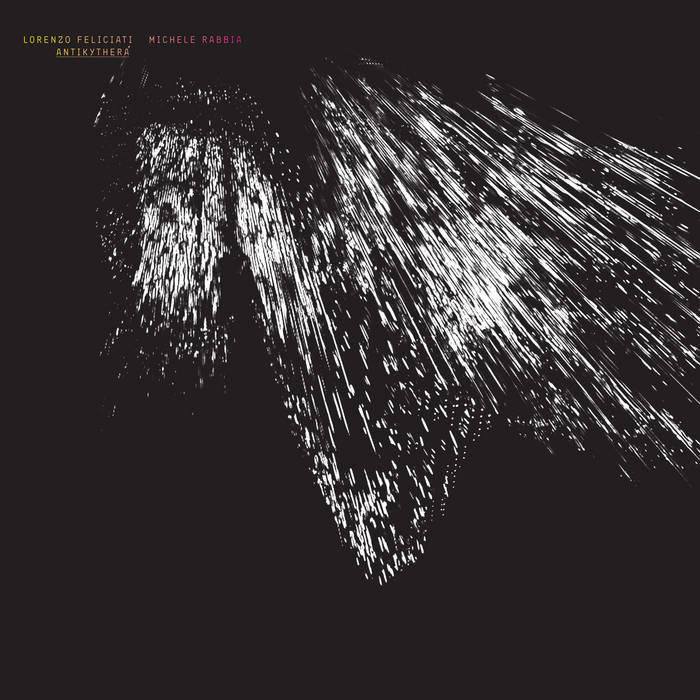 Says Felicati of his partner Rabbia, whose delicate touch and coloristic approach to the kit have graced various ECM and CAM Jazz albums and underscores this interactive session: “Michele and I met several years ago and immediately felt that our chemistry was something special and that ideas were abundant. To make an album out of them was an easy decision to make. Antikythera is out first collaboration, one stemming from great human and musical interaction.”

The result of several joint studio sessions spread out over two years, Antikythera pieces together recorded improvisations and soundscapes that eventually, after an intensive process of post-production, overdubs and editing, were integrated into an organic-sounding whole. “In the studio we were always in recording mode,” said Feliciati, “so every little idea that came out from this mutual listening and response/interaction process became eventually available to me to work on during post-production, sometimes as a complete composition, sometimes as the improvised starting point for a new construction.”

Feliciati explained his notion for the theme of Antikythera: “My idea was to think of the music we were improvising as a complex machine but that was working in a perfect, fluid way. Only after I started post-production work on the studio improvisations did I learn about an ancient Greek machine that was found in the ocean near the Antikythera island. I immediately thought it would be a perfect way to convey the idea of the music we were pursuing: a machine coming from the past (I think that improvisation is an ancient human art that changes through the centuries but will always be with us) made of a lot of different parts and gears (like all the musicians that are part of the final result) and able to read the present and predict the future, able to look at the unknown and find useful things in it. And after all, isn’t this what art is supposed to do?”

He added, “I think Antikythera can be viewed and experienced as a psychedelic album of sorts, as it does possess the qualities of a trip.”

The opener, “Irregular Orbit,” introduces a captivating theme that might serve as incidental music for a documentary on the story of the ancient Antikythera. Says the composer, “The idea was to create some sort of opening theme with a mysterious first part, like the dawn before a battle or a start of an eclipse in the sky. And then arrives all the dissonance we have now in our lives and on the planet. And the Antikythera machine is there to study, read and report all this.”

“223 Teeth” makes great use of Andy Sheppard’s soprano sax against at pedaling ostinato before pianist Marcotulli introduces some dizzying arpeggios that suggest the grinding gears of this ancient mechanism. “The idea of a machine that starts with all the gears (from the little ones to the big ones) starting to move together was clear from the start of the improvisation when Michele started the ‘clock’ sound generator he keeps among his percussions. So the pieces goes through the same motions we went through while recording, then when working on post- production and editing: slowly at first but then progressively faster and faster and faster.”

“Corrosion” is a haunting soundscape that showcases Rabbia's coloristic cymbals playing and percussive approach to the kit. Said Feliciati, “Michele is a master in using the cymbals in a very creative way. There are always so many cymbals and interesting percussions and sound generating artifacts around him when he plays.”

“Prochronistic” opens with Feliciati’s foreboding ostinato on bass guitar before Cuong Vu enters with some very lyrical, warm-toned trumpet playing. As Feliciati explained, “Cuong sent me some tracks of him improvising on the pre-existing track that I had sent him. And then I edited them to the result you hear. He is the ultimate creator of melodies. His sense of melody and counterpoint is so good it never ceases to surprise me, even after all the music we did together.”

Vu also blows with typical authority and melodic brilliance over a soundscape that Feliciati created for “Sidereal.” As the bassist explained about his modus operandi on this tune and throughout Antikythera: “All you hear from Cuong is the result of him reacting to the music. The tracks I sent the guests to work on were never finished, because I then added new elements that came to me from listening to their contributions and responses. The guests sent me several takes of their responses/improvisations. Depending on the material, I sometimes brought parts from different takes together to achieve a greater sense of organicity.”

“Perigree” is a beautiful showcase for Alessandro Gwis' delicate touch on piano. “We know each other from way back,” said Feliciati of the Rome native. “We played on hundreds of different releases as session musicians and he has been part of my music and solo albums since Frequent Flyer (the bassist’s 2012 debut on RareNoise Records). Before that he was the pianist of my Wasabi trio featuring me on upright bass. Alessandro is a beautiful soul and a great friend of mine. He is such a pure genius on the piano. His use of additional electronics is unique and adds a lot of poetry to the music.”

“Apogee” features Feliciati’s Naked Truth and Mumpbeak bandmate Roy Powell on organ, Mini-Moog and Fender Rhodes. “It’s a reference to the music from the ‘70s that I know both me and Roy love,” said the bassist. “For this song I imagined some sort of a crazy psychedelic church ceremony and thought Roy could be a perfect master of ceremony for that.”

The closer, “Parapegma,” is a graceful number with a kind of gentle tango feel to it that features some plaintive tenor sax work from Sheppard. “We tracked the trio of Michele, Rita and myself in her studio in the countryside of Rome for two days in an atmosphere of great amusement and relaxation,” explained Feliciati. “What you hear is what we created together in her studio, apart from Andy’s contribution, which was added on later. Strangely enough, the working title was ‘Country’ because we were working in the countryside. We thought it was the perfect music to chill out and end the trip, to stop and look out at the stars through the Anykithera machine.”

Feliciati’s latest is a beautifully expansive aural trip that showcases his profound sound alchemy in the studio along with the exceptional talents of his gifted inner circle. Another triumphant undertaking for the bassist-composer-producer, Anykithera is scheduled for an October release on RareNoise Records.

Featured sounds by K.Spark and WIZDUMB, plus Basi joins the show to discuss his latest release.